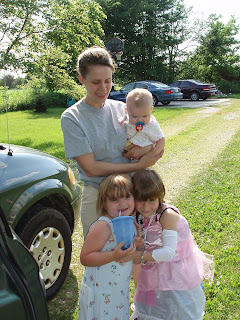 It’s been some time since a road trip has involved straying from the Interstate and out into open country. Most of our vacations involve pilgrimages to family members in distant states. In my family, anything under 500 miles is a day trip.
But as we strayed from I-75 to pick up Dear Mrs. Reinhard (hereafter DMR) & Co., we had an opportunity to slow down a bit and take in the scenery. Holsteins luxuriating in the sun just a stone’s throw from a full-sized tee-pee parked in the middle of a trailer park; a few miles down the road, a Supersized ceramic chicken perched on the front lawn of a convenience store.
Then, we pull up at the farmhouse. I was prepared for the lines of laundry gently swaying in the wind (her last article in “Canticle” gave me a fresh appreciation for sun-dried sheets). What I did not expect was the wide expanse of lawn dotted with netted trampoline and lavender dotted with butterflies. In the charming old farmhouse with friendly eat-in kitchen and adjoining playroom, my daughter discovered an oversized trunk full of princess togs with squeals of unabashed delight.
A little over an hour later, we set out again for our first stop of the trip. I marveled at what a good-natured child Sarah’s youngest is, alternately chorbling and dozing in the seat behind me. The two girls are clearly having the time of their lives, squealing and tormenting my son … who for the most part is taking it with admirable restraint.
Finally arrived at the hotel. Outdoor, unheated pool … but a promise is a promise, and we go in while Sarah gets the baby down. Teeth chattering, lips turning blue … but the merest hint of returning to the cozy warmth of the room is met with protests. “A few minutes more! Just a minute!” the chorus goes up. “OK,” I say, “But only if you float.” Little Miss E (LME) screws up her face with brave determination, leans back far enough to get the tips of her hair in the water, and bolts upright, beaming.
“See? I swimmed.”
Christopher (whose name I am thinking of changing to “Jack” because of someone’s recent comment that I have “Jack Russell Terrier Children”) cast a longing look at the high-school kids who were splashing in the deep end. Finally unable to restrain himself a moment longer, he dived into the pool with his best caveman yell, cannonballed his way into the middle of the group, and surfaced again grinning widely.
Seconds later, the pool emptied. No way was a group of cool high school dudes going to swim with a minnow. But Chris didn’t care. He’d had his moment in the sun.
Tomorrow is the marathon trip to Atlanta. We leave at 8.
Pray for us.
Posted by Heidi Hess Saxton at 8:29 PM

I don't actually recall seeing you there (but then again, I was in the lobby most of the time!) but I *do* remember these sweet little girls. The one on the left enjoyed playing with my infant daughter.

Glad you were able to make it to Atlanta, safe and sound! (and I'm glad that someone posted a recap of the whole thing since... well... I was in the lobby. Pretty much the.whole.time.)

Sarah said you lived "just a bit north". Milan, huh? My parents lived for about 15 years in Bellevue (big old victorian house on Main St.). They moved down to FL in 2004, I think.