Come Be My Light: Thoughts on Spiritual Motherhood 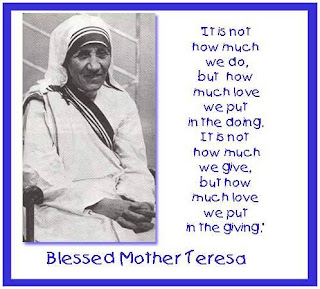 Persistent. Fearless. Noble. These are words frequently associated with Blessed Mother Teresa of Calcutta and her sisters, the Missionaries of Charity. I had heard (who hasn’t?) that an oppressive spiritual cloud had plagued her during all but the earliest years of religious life. Some (hack journalist with ulterior motives, mainly) were quick to denounce her when these letters first surfaced, claiming they were proof of Mother Teresa’s lack of sanctity. Fortunately, wiser and more discerning heads prevailed, as this lack of consolation is not unprecedented among Catholic mystics.

So when I began to pore over Brian Kolodiejchuk’s Come Be My Light: The Private Writings of the “Saint of Calcutta” (see Resources), I was expecting the darkness.

What surprised me was the light … the sense that I had found a kindred spirit, someone who could help me to make sense of my own vocation.

In fact, as I delved into the book it occurred to me that Blessed Teresa of Calcutta is the perfect patroness for adoptive and foster mothers. She embodied a number of qualities and gifts that foster and adoptive parents need to emulate in order to succeed:

In the early chapters of the book, the thing that struck me is that when she received the “call within a call,” she responded to it despite the fact that (1) she was perfectly happy where she was and (2) her perseverance nearly ruined her reputation with her superiors (who had difficulty reining in the diminutive Albanian) as well as her own sisters, and caused great consternation within her religious order.

Mother Teresa had every reason to ignore the call, and only one reason to persevere: to satiate the thirst of Christ for souls. She writes:

I used to get goose bumps at the thought of suffering – but now I embrace suffering before it actually comes, and like this Jesus and I live in love. Do not think that my spiritual life is strewn with roses – that is a flower which I hardly ever find on my way. Quite the contrary, I have more often as my companion “darkness.” And when the night becomes very thick – and it seems to me as if I will end up in hell – then I simply offer myself to Jesus (p.20).

When Craig and I first started the process to become foster parents, Johnnette reminded me that spiritual motherhood (which is what she saw me doing with Christopher and Sarah, as I had not given birth to them myself) was an important component of the feminine vocation.

At first I resisted this strongly – there was nothing “spiritual,” I thought, about changing dirty diapers and wiping down walls. I felt that by calling me a “spiritual” mother, she was diminishing the role I was going to play in the life of these kids. As far as I was concerned, I was their honest-to-goodness real mother, especially after the adoption came through.

As I make my way through these pages, however, I’ve come to see this differently. Despite the fact that her work was as down-and-dirty as it could possibly be, bathing and feeding the indigent and dying, and educating the children left in the gutter, the primary battle Mother Teresa fought was an intrinsically spiritual one – one within herself, and often by herself.

She and her sisters went into the worst slums and gutters of Calcutta to touch the lives of thousands of men, women, and children who had known only suffering, in order to break the bonds of the spiritual forces that enslaved them. She believed her most important task was to “bring souls to Jesus, and bring Jesus to souls.”

And it is this that takes my breath away: She did it all with a smile. She smiled at Jesus, no matter how the darkness raged, how the isolation threatened to smother her. She gave Him everything she had, and then she gave even her poverty.

She did not worry, or look for escape clauses. The work was not hers, but God’s. She had only to give it her all … and trust God for the results.

And, I need to do the same. What a challenge ... and what a relief!

Blessed Teresa, Mother of Calcutta and of all the poor and powerless,
You saw America as a land of desperate poverty, despite our wealth.
Hundreds of thousands of children are neglected, abused, unloved.
Pray, please pray for them and for us, that the Lord of the Harvest
Will wake up His servants, who will gather the harvest not into barns
But into our very hearts and homes.

Blessed Teresa, Patroness of Spiritual Parents, Pray for Us!

I'll have to put this one on my "to read" list. Thanks for the tip.

Heidi, I know I've said this before here, but I really enjoy how you write about adopting and fostering. I don't know a thing about it, though I relate with the "spiritual motherhood" part of it. And I am so excited to read Mother Teresa's book - it's first up on my Lenten reading list! :)

Heidi, I am an adoptive mother of a 4 yo child with ADHD. I feel God´s love through your words, I wanted you to know you´ve helped me many times.
I want to ask your permission to translate to spanish parts of this post to put in my blog and link to this blog and the EMN.
God Bless.