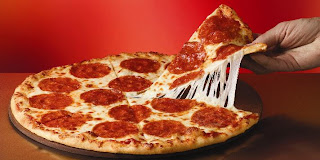 Today I was waiting for Sarah's kindergarten class to emerge from the school building at pickup, and noticed that Kristi, the Pizza Mom (who collects order forms and money for the weekly pizza lunch) was trying to alphabetize a stack of forms nearly as long as my arm.

"Can I give you a hint?" I asked her. I told her how we used to communicate with my Aunt Rosemary, who had contracted Lou Gherig's disease at 35. We broke the alphabet into four parts, and had her spell out words by blinking her eyes when we reached the right letter: Adolph (A-H), Girl (G-L), Manner (M-R) and Stay (S-Z). So, if the word was "picnic," she would blink on "Manner," then again when we reached "P" ("M-N-O-P. P, okay... next letter.")

To this day, when I have a ton of filing or alphabetizing to do, I break everything down into four piles, then subdivide from there. Goes much faster.

The story of Aunt Rosemary led to a general discussion about suffering, and I told Kristi how becoming Catholic had made such a difference in how I perceived pain. Suffering was no longer pointless, but a process by which we are purified and even transformed.

Then my eyes fell on one of the papers in my stack, and my throat closed up. Before I could steel myself, tears filled my eyes. It was his.

One of the children at the kids' school shares the same name -- first and last -- of the child my sister gave up for adoption when she was seventeen. The long, drawn-out process left everyone in the family a little bitter about the family court system ... ultimately, the baby was given to his biological father, who has a criminal record, rather than the Christian couple my sister had selected, who had promised to allow the child to have a relationship with us as he grew older. Instead, the father took the baby and swore none of us would lay eyes on his son ever again.

Today Andrew would be just about the same age as the boy at my kids' school. And so when I hear this boy's name called out in assembly, my heart skips a beat. It's not the same kid, of course ... but somewhere out there I have a nephew I will never know, and who will likely never know about me. I pray he is healthy and happy. But barring a miracle, I'll never know for sure.

From time to time I stumble across websites that are dedicated to birthparents or first parents. In their pain, these mothers can be bitterly dismissive of adoptive parents -- as though all of us are rich, self-entitled baby stealers who say and do anything to get what we want. When I encounter women like this, I try to empathize. Their pain and regret is infinitely greater than mine, for whereas I lost a nephew, they relinquished their own flesh and blood. Often under duress, and never eagerly.

I wonder how often they hear another child being called on the playground, and feel the cut of loss. Whether that loss is a beloved adult relative, or a helpless infant who never knew your name ... you never entirely get over it, do you?

Heavenly Father, how it must have pained you to send your Son out into the world, knowing the fate that awaited him there. Watch over your children who have suffered similar loss. Make us gentle as we tend to the invisible wounds of those closest to us. In the name of the Father, and the Son, and the Holy Spirit, Amen.

Mary, Seat of Wisdom, pray for us.
Posted by Heidi Hess Saxton at 4:57 PM

Heidi, thanks for this lovely post. Very touching. Lisa