Parenting from the Inside Out: A review for parents who want to do better. 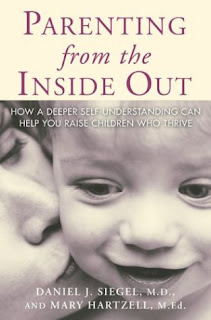 During the month of April, Behold Your Mother is sponsoring a writer's contest. For details, click here.

Each time I make something for dinner that one or both the children don't like, the familiar refrain resounds: "Tell us the story of the baked beans!"

When I was about six or seven, as I recall, my mother made homemade baked beans for dinner, which I refused to eat because the onions and molasses were so strong. After an hour of watching me poke at my plate, my mother said to me, "You may be excused, Heidi. Maybe you'll eat a good breakfast."

The next morning, I ran down to the kitchen expecting to find a steaming plate of oatmeal or scrambled eggs ... and found instead the baked beans, now cold and sticking to the plate. Again I refused to eat them, and went hungry until lunchtime. That night for dinner I was given beans a third time, and ate them -- very reluctantly -- only when my father informed me that I would get the beans the next morning in my oatmeal. (This story is always met with a resounding Y-u-u-u-c-k!)

So when the kids balk at eating dinner, all I have to say is, "So... you want that in your oatmeal tomorrow?" Problem solved.

Long before we become parents, we form impressions of what constitutes a "good parent" from the adults in our lives. Our own parents, for better or worse, provided our first model; other cues came from friends and extended family members.

* The aunt who consistently gave up a career in nursing in order to tend to her growing family and bedridden mother-in-law.

* The neighbor who allowed her daughter use mascara in eighth grade to cover up the fact that her lashes were blonde in one eye and brown in the other.

* The church friend who invited every new family at church for "impromptu" dinners of chicken parmesan.

Sometimes these models were not so heart-warming: the parent who drank or spanked excessively, who exaggerated her children's misbehavior to win sympathy but refused to come clean with her own dark deeds, who yelled at the kids for making noise while he watched T.V. instead of turning off the set and engaging them in conversation. And all too often, these children grow up and find themselves saying and doing the same things with their own children, despite their firm intention never to repeat the same mistakes.

So what is a parent to do?

In Parenting from the Inside Out, Dr. Daniel J. Siegel and Mary Hartzell explore "the extent to which our childhood experiences shape the way we parent .... and offer parents a step-by-step approach to forming a deeper understanding of their own life stories that will help them raise compassionate and resilient children." The authors help parents to identify the "toxic ruptures" in the relationship between parent and child, and the interactive dialogue that must occur in order to repair the damage. Each chapter includes "inside-out exercises" to help the reader apply the lessons of their own lives in order to strength the parent-child bond.
Posted by Heidi Hess Saxton at 4:53 PM

I love the baked bean story. My own experience was with brussels sprouts - I am still proud of the fact that it took three days before I caved in. I haven't been able to look a brussels sprout in the eye since.

Hmmm, must remember that one for my kids.