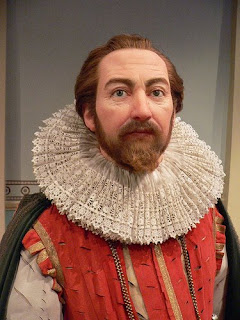 Today was the annual "Wax History Museum" event at Christopher's school. Each kid had to dress up like one of the European explorers of the 16-17th centuries, and recite a little spiel to parents who circulated through the gym, pushing a little circular sticker "button" on each costume to activate said spiel.
Christopher was John Davis, an English explorer who discovered the Falkland Islands in the south, and the Davis Straight in the north. He and his men slaughtered 250,000 penguins to eat on their way home ... And wound up losing most of the crew to starvation when the meat spoiled partway along the journey. Chris had a little penguin figurine to top off his costume (a Captain Hook re-creation).
Looking around the gym, I was amazed at the creativity many of these mothers showed, fashioning fully lined and trimmed capes, vests, breeches, not to mention a full spectrum of hats. Ironically, the costume I liked most -- fashioned from a yard of brown felt -- was made by a mother who expressed undisguised envy over Christopher's crushed velvet, internet purchased getup. Sewing is not my thing ... eBay, on the other hand ...
As mothers, we are quick to discount our own efforts, and compare our weakest efforts with the most impressive of other moms. I remember years back, when I was still struggling to get a handle on the whole foster parenting thing, when I berated myself for contributing pre-cut veggies and dip for an afternoon snack, when that morning another mother had gotten up at 4:30 to bake homemade cinnamon rolls.
The thing is ... the kids were happy with both snacks! And today, both kids looked equally cute. What mattered is that we cared enough to show up. (Christopher was especially thrilled when I snuck him outside for a few Girl Scout cookies. "Yeah! I get to spend some quiet time with Mom!")
So to all you creative (and not so creative) moms out there ... Let's give ourselves a break, shall we?
Image: Sir Francis Drake, Madam Tussauds at Flickr
Posted by Heidi Hess Saxton at 8:05 PM