Sarah has the next Catholic Carnival up at "Another Day of Catholic Pondering." Check it out! 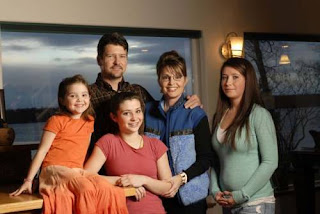 Craig and I just returned from a week-long (more or less) technology break in northern Michigan. One nine-inch TV with two fuzzy channels (for kids videos -- hey, it was supposed to be OUR vacation, too!), a cell phone for emergencies only ... and blessed peace and quiet.
In the interim, we totally missed the announcement of Senator McCain's VP pick.
My first reaction: Sarah who?
My second reaction, after just a couple of clicks: Sarah wow! The clincher was Barbara Boxer's quote: “The only similarity between her and Hillary Clinton is that they are both women,” said Sen. Barbara Boxer (D-Calif.). “On the issues, they could not be further apart.”
Hallelujiah! A ringing endorsement indeed.
For the first time in weeks, I'm actually looking forward to the election. I actually bought a bumper sticker. (That would be a first for me.) AND the matching lawn sign and polo.
And Craig and I are planning to head over to Sterling Heights on Friday to hear the senator and governor speak at Freedom Hill. Another first.
Governor Sarah Palin ... A woman with enough gumption to oust a four-term good ol' boy by a two-to-one margin. A woman who is unapologetically and unreservedly pro-life ... and who has the gifts and the integrity to do more than just talk about it. She is principled. She is tough.
She's a mother. This bothers some people. "What about her family? What about her children, who need her?"
And yet, if we want someone who lives out her convictions ... doesn't it stand to reason that children are going to be involved? Yes, she has a special needs infant (whom she breastfeeds). Yes, she has a seven-teen-year-old daughter who is pregnant out of wedlock. (My mother, the original SAHM, endured not one but THREE out-of-wedlock pregnancies among her children.) She also has twelve years of experience in public service in a state half the size of the continental U.S.
In the end, it is up to the Palins to decide what is best for their family. If parenting special needs children has taught me nothing else, it's that no one else can understand the internal dynamics of a family better than the individuals within that family. Ultimately, it is up to Todd and Sarah to decide before God what is best for their family. It's a choice they made when she ran for governor ... and a choice they have clearly committed themselves to making now.
Ultimately, it's not up to us to decide what is best for Palin's family. It's up to us to decide who is best suited to run our country, defending the needs of the weakest and most vulnerable members of our society. Will it be the fast-talking junior senator from the state of Illinois ... or the man who has the foresight and wisdom to take as his running mate a woman who is personally, unapologetically and unreservedly ... pro-life?
Already the media has done their best to discredit her. Governor Palin has retained council in connection with an investigation regarding the firing of Public Safety Commissioner Walt Monegan, who was terminated some time after refusing to fire her rogue brother-in-law, Mike Wooten, whose record contains multiple charges of improper conduct in both his personal and professional life. Wooten, now divorced from Palin's sister, and is on record as having threatened that his father-in-law would "eat a f-g bullet" if he tried to retain council to defend his daughter.
Hmmm... let's see how the Democrats play this one. Do they REALLY want to appear to be on the side of a child and wife abuser, even one dressed in blue?
In point of fact, based on what I've read so far, Mrs. Palin showed admirable restraint. Instead of having the man who used a taser on her nephew and threatened her father taken out and beaten senseless in a dark alley (a feeling I would have completely understood, from what my own sister went through) she restrained herself and trusted the commissioner to do his job.
By the sounds of it, he didn't. And yet, the governor stands accused.
Keep your eyes on the prize, Mrs. Palin. We're counting on you.
Posted by Heidi Hess Saxton at 1:30 PM

I am so excited for your country. When I first read about Sarah Palan I was full of hope. It is so great to see a women in politics that is pro family values.

oh it's a great thing alright.

it'll be even greater if we win!

We are so blessed right now! Her speech last night was a thrilling, confident, "Bring it on!" charge for a better nation.

Thanks for the common sense, Heidi. We are excited about the election now, too. There are many times in history when women who were mothers had to step into the fray for the good of the nation.

What a wonderful post. I could have written it! I had decided that I wasn't even going to vote in November but from the moment I heard Sarah Palin speak and from everything I have learned about her and her family, I am in awe of this woman. I can't wait for November!