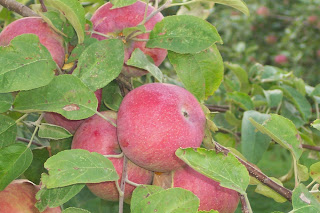 According to tradition (ours), the first forey into an apple orchard each fall is followed by a breakfast of apple dumplings with vanilla milk.

So, since the kids had a day off of school today, and the Cortlands were in season ... we headed to Wasem's for apple picking and cider swilling. Not to mention the tasty pumpkin donuts!

In honor of Apple Dumpling Day, I'd like to share with you this time-tested recipe, passed down through at least three generations of my family. (And while you're eating them, check out EMN, where our guest poster "Pops" talks about another great American tradition ... military service, and what it's like to be the parent of a soldier.)

To make Heidi's Apple Dumplings, you will need...

First, make the dumplings. Cut together flour, salt, bp, shortening together to course crumbs; add milk to make dough. Roll thin like pie crust (handling as little as possible to keep it tender). Place hand-sized (fingers spread) circle of dough in one hand, cupped slightly. Put apple quarters on top, then draw up dough around apples, squeezing with both hands so that dough covers entire apple. Place each "doughed" apple in baking dish, making sure there is space (at least an inch) between each apple. Continue with remaining apples.

Next, bring to boil the sugar, water, cinnamon, nutmeg, and butter. Stirring constantly, continue to boil, adding cinnamon candies (if used) in the last minute. Pour hot syrup over apples, making sure some of the juice gets on each one. Bake 375 for 35-40 minutes, until golden.

Can I come over next year for Apple Dumpling Day? PAAAHHHHLEEEEZE?!?!?

I'm gonna make this right away! There not fattening, right? LOL

These sound fantastic. I mentioned it to the kids and they thought I was kidding. Dessert for breakfast? Yeah! I like that idea. Thanks for the great idea!

I love this tradition! And my daughter will be just about the right age for us to start it next year...thanks so much for the recipe.