The Pope Pats a Python 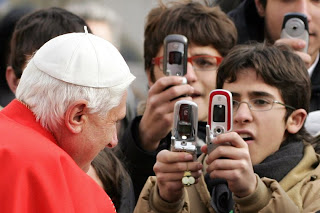 This morning on "Catholic Connection" Teresa interviewed Joan Lewis about the activities of Pope Benedict XVI, who is in Sydney this week for World Youth Day.
My favorite tidbit was the Holy Father got to meet some of the indiginous fauna (that's them on the left), as well as a red wallaby joey, a koala ... and a python. Joan mentioned that the pope "patted each one." (Photo courtesy of "Faith and Family Live." 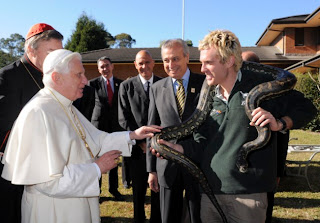 In the Garden of Eden, after our first parents' fall from grace, the snake was cursed for its part in Satan's plan, forced to crawl upon its belly and eat dust, becoming an eternal visual reminder of the ultimate fate of evil in the world. In Genesis 3:15 God promised the ultimate triumph of good, that
"I will put emnity between you and the woman,
and between your seed and her seed;
he shall bruise your head,
and you shall bruise his heel."
The nature of evil is sneaky, slippery, elusive. Especially in our day and age, evil is often transformed into something sleeker, more intriguing ... or just more convenient. But this week is a time for good to shine, as 200,000 young people from all over the world have gathered to celebrate the triumph of the Woman's Seed.
Posted by Heidi Hess Saxton at 6:39 AM

My husband and three eldest children are in Sydney this week for WYD. Yesterday they got some great photos of the Pope but he was in the Pope Mobile, not patting a python.