In Vitro: Why Not? 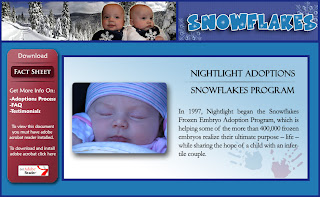 Today I'd like to take a look at the issue of fertility assistance technology, specifically the difficulties stemming from in vitro fertilization. To start, let's take a look at paragraph 18:

In preserving intact the whole moral law of marriage, the Church is convinced that she is contributing to the creation of a truly human civilization. She urges man not to betray his personal responsibilities by putting all his faith in technical expedients. In this way she defends the dignity of husband and wife.

It comes as a surprise to some that the Church would not favor technology that assists couples in producing children. To some, the fact that the Church has always been adamantly opposed to artificial contraception, suggests that the truly faithful Christian should be producing as many children in as short order as possible.

But when we remember the dual purpose of marriage, and the natural order that produces children within the marital embrace of his mother and father, we see that forcing science into the mix violates the dignities of all parties.

Now, if a couple is having difficulty conceiving, it is perfectly legitimate to use medical technology to diagnose disorders and even to restore reproductive health. The Pope Paul VI Institute has been assisting couples wanting to achieve pregnancy (and women suffering from a variety of other health issues) since Dr. Thomas Hilgers founded it in 1985.

Still, there are some methodologies that are not morally acceptable, especially IVF. One of the most obvious difficulties lies in the fact that so many embryos are left in a state of frozen half-life, abandoned in the petri dish. Since 1997, the Snowflakes Embryonic Adoption Program has been working to give life to more than 400,000 unborn children. And yet, some Catholic moral theologians insist that this type of adoption only compounds the original error of the natural parents. Others insist that the child's right to life trumps all.

When my husband and I contemplated how far we should go to "help God along" in our efforts to become parents, we finally took great comfort in one passage from the Catechism (par. 2379):

"The Gospel shows that physical sterility is not an absolute evil. Spouses who still suffer from infertility after exhausting legitimate medical procedures should unite themselves with the Lord's Cross, the source of all spiritual fecundity. They can give expression to their generosity by adopting abandoned children or performing demanding services for others."

Posted by Heidi Hess Saxton at 6:14 AM