Tribute to my Grandmother 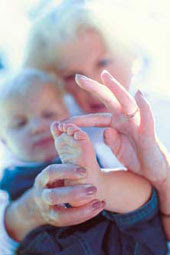 “Oh, what a pretty little girl! Won’t you come here and sit on my lap, and visit with me?” With effort, my grandmother eagerly reached out to Sarah, who exclaimed over the old woman’s rose-colored fingertips. Soon the two of them were chatting like old friends. Sarah enthralled her great-grandmother with stories from preschool, and the unintended joke that had made me laugh just a few days before:

For the past several years, my paternal grandmother has been living in a senior residence in eastern Ohio, down the street from my Aunt Susan. During that time Grandma mellowed considerably – and has also lost most of her memory. When we approached her wheelchair, Grandma clearly had no idea who I was … she only had eyes for my daughter.

As I watched the two of them chat and laugh, I felt a little guilty about the fact that I had not wanted to bring my children to visit her at all. But Aunt Suzy, my godmother, can talk me into almost anything. And so we went … but I wasn’t happy about it.

“Why should I go out of my way to spend time with someone who has never been able to conceal what a colossal disappointment I am to her?” I grumped to my father (another person who can talk me into almost anything).

“For the same reason I do,” he said dryly. “Because she’s my mother.”

In retrospect, I was glad we went. It was the last time I saw her alive … and I was grateful that the memory was a happy one. For all of us.


The Best … and the Rest

As her oldest grandchild – the oldest child of her oldest child – I have vivid memories of the long weekends we spent at my father’s childhood home. Grandma’s tiny kitchen, in which she turned out impressive Thanksgiving spreads one day, and fresh-from-the-oven cinnamon buns the next. The covered porch with its monstrous green glider, where my grandparents sat with us, sipping glass bottles of Coke and munching peanuts. Grandma’s bedroom was lined with photographs of a bygone era; my favorites were the images of the elegant young woman posing for her engagement announcement, and the younger version of herself dancing en pointe.

In her younger days Grandma projected the very image of genteel propriety; she married well, then set aside her nursing career to tend to the needs of her husband and three children. In public she deferred to her husband; in private she ruled her home with a velvet-covered iron fist.

Grandma had high expectations of her three kids – and harbored some unfortunate prejudices. When my aunt fell in love with a Filipino doctor and married him, Grandma did not speak to her daughter for three years, until the first grandson was born. Ironically, this same daughter lovingly tended to her mother’s needs after Grandpa passed.

In truth, what I love most about my grandmother, her greatest legacy, is her children. My father – a quiet, unassuming man who served his country and raised his family (four girls) with understated passion and integrity. My Aunt Susan, who found it in her heart to forgive – truly and completely – the shortcomings of the flawed yet well-meaning individuals who raised her, and who embodies the “sandwich generation,” having raised five children while tending to both her widowed Filipina mother-in-law, whose language she could not speak, as well as her own mother. And my Uncle Pete, just twelve years older than me, who called me his “Sweetie Pie” … and was married three times before finding his sweetheart, Peggy. None of Grandma's kids perfectly lived up to her high expectations, but all of them grew up to be compassionate individuals and hard workers who consistently put family first.


The Glory of, Story of Love

“Friends are the family you get to choose,” the saying goes. And while the reverse can also be true – family members can become true friends – it doesn’t always work that way. On the other hand, those whose company we tend to avoid can be a sure source of grace, if we are willing.

I wasn’t smart enough to look for it. I took my grandmother’s criticisms to heart, interpreting them as rejection rather than attempts to help me. I see now that she was not malevolent in her intentions; she simply didn’t know what to make of me, or of my independence. So I tuned her out, closing my heart to her criticism … and to her.

My sister Kathy managed to look past my grandmother’s gruff exterior – first, by cultivating a close relationship with Grandpa. When Kathy was young she spent hours in Grandpa's shop, his quiet sanctuary. When Grandpa died, Kathy took the loss especially hard … and Grandma found an ally in her grief. Later, when Kathy made devastating life choices, Grandma stuck by her.

No, my grandmother was not an easy person to love. But those who made the effort were enriched by it. As for me, I will always remember that last encounter with my Grandmother as a healing moment. The angry memories that had preoccupied my thoughts were finally silenced as I watched her happy, carefree exchange with my children. Right then, she was the grandmother I always wanted.
Posted by Heidi Hess Saxton at 7:29 PM