Three Things My Parents Did Right 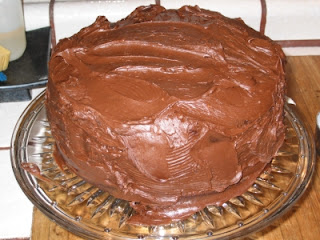 Jen at "Et tu?" has started a group writing project, asking for people to submit a post on the following topic:
"What are three things
your parents did right?"
Here are mine, in no particular order:
1. Listen to God when He asks you to do something. The summer before I went to teach ESL in Senegal, West Africa, I overheard my father defending my decision to a relative who could not believe that my parents would let me "waste" my life that way. I'll never forget his response: "Well, we've spent our whole life teaching her obedience. We can hardly blame her for taking us seriously enough to follow when GOD tells her to do something!"
I've often wondered if there were times he wished he hadn't taught the lesson quite so well. Such as when (to my parents' great consternation) I became Catholic in 1994. They struggled with the decision, I know. But a few years after the fact (right around the time Craig and I married in 1999, in fact), Dad said, "You know, Heidi, I don't waste a lot of time trying to talk you out of something. I know that before you make a decision, you look at all the angles and think it over carefully ... but once the choice is made, that's it!" (He said it like it was a good thing, bless him.)

2. Ask God for what you need. I was in third grade when my sister Chris was diagnosed with bone cancer, and the years that followed were very difficult for all of us ... financially and in every other way. Our church family rallied around us, and finally things started getting better.
One year we decided to host an exchange student. My parents invited her parents to visit us the following spring ... but then Chris wound up back in the hospital. Late one night, my parents debated over whether to send our exchange student to live with another family, since they didn't know how they were going to feed their own kids with all the medical bills.
The next morning as I came down to breakfast, I heard my father pounding some boards on our front porch. I went out and saw that he had hammered a popsicle stick under our mail box that read "Tervetuola." "That means 'welcome' in Finnish," Jaana told me. My parents had decided that we would keep her -- and trust God to provide for her parents.
After breakfast we piled into the car, and Dad warned us not to say anything about our medical bills to the people at church. "They've helped us enough already." We didn't ... and when we got back from church that afternoon, our hearts dropped when we saw the front porch door propped open. Thinking we had been robbed, my dad went ahead to make sure it was safe.
The next thing we knew, we heard Dad laugh. We ran up the front porch steps ... and found Dad standing in the middle of ten large boxes of groceries. And on top of the largest box was a three-layer chocolate cake (my favorite). "It must have been God's hospitality angel," my mother announced. And she must have been right, since no one else ever stepped forward to take the credit.
The food fed us for a month -- and the experience stayed with me for life. Whenever I've found myself in a tight spot, I remember that chocolate cake. Suddenly money for the phone bill doesn't seem like such a big thing.
Twenty years later, I returned to New Jersey to show my husband and kids the house I grew up in. My parents have long since moved from the area ... but that popsicle is still nailed to the mailbox.

3. The best way to stop feeling sorry for yourself is to look out for someone worse off than you. We didn't have a lot of spare cash in those days, but my mother especially was remarkable in her ability to find ways to help others. She'd see my hippie friend Larry coming down the block, and instead of bolting the door she'd go into the kitchen and whip up a tray of biscuits, knowing that he probably hadn't eaten much that day. Biscuits and peanutbutter or honey. He'd polish off the whole tray, every time.
This past month I've spent a lot of time out of commission, and been on the receiving end of other people's generosity. One friend came in and washed my kitchen floor. Another came and did a few loads of laundry. The ladies at church brought meals three times a week. The one who washed the floor (my most hated chore) said it best. "When my back went out last year, someone came over and did this for me, and I promised myself I'd 'pay it forward.' Someday you'll have a turn to do the same ... but for now, go lay down and get better!"
I think there's an element of this in the way my parents have lived, too. When Dad retired last year, the first thing he did was get a regular gig with Habitat for Humanity, and mom took a Spanish class so she could take over the lunch-making ministry for migrant kids in their area. They spent much of my childhood being on the receiving and ... and now they're "paying it forward" with every ounce of strength and enthusiasm they can muster.
Not out of obligation, though. Out of a lifetime of love caught ... one chocolate cake at a time.

Wow. Really amazing stories here. I'm going to be thinking about this post for a while. Thank you so much for sharing.

Thanks for stopping by, Jennifer! God bless you!

What excellent examples your parents are of putting their complete faith in God. So generous.

Oh, that chocolate cake story is wonderful! Isn't the Lord's generosity amazing? One of my closest friendships formed with a woman from my church choir. We were both in tight spots with little children. I'd spot her an expensive bottle of soy sauce and and a bit of French cheese from my food stamps-when her groceries were running low, and she'd give me diapers when our cash was out at the end of the month. Those type of friendships last forever.

Thanks for your kind comment on my blog. I'll have to check out that author.

Parents are amazing aren't they! Such great lessons that they taught you.