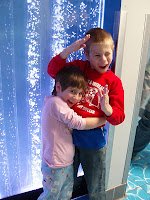 Last weekend we had breakfast with Christopher's kindergarten teacher. (It seems he has been stopping in to see her every morning on his way to his first-grade class.) I can see why my son loves Mrs. Boe so much; how many other teachers initiate an outing with a former students and his family, on a weekend?

While we were digging into our French toast, Mrs. Boe regaled us with tales of her last camping expedition with her two children (ages 3 and 5). They were going to Mackinac Island for the weekend to a water park.

Since island accommodations can get a bit pricey, they decided to camp at the local KOA in a small tent, and cook over a camp fire. "It was going to be a real adventure!" Sandy said. It would have been, too ... except for two little things. First, her husband was called away at the last minute on a business trip. "No problem! I'll take the kids up and meet you there," she told him.

Then, shortly after they got there and pitched their tent, it began to pour. Cramped into the tiny space with two young children, Sandy spent two days reading stories and trying to keep the kids from touching the tent walls (to keep the water out). Since she couldn't light a fire to cook the food she'd brought ... they ate raw S'mores (marshmallows and chocolate bars) for dinner. She recounted this story without a trace of self-pity or sense of cosmic injustice. She had promised her kids an adventure -- and they got one!

"You do realize," I said to my husband later, "that if it had been me, we would have found the nearest Holiday Inn and ordered a pizza, don't you?"

"Yup. And I wouldn't have blamed you a bit."

Some parents go looking for adventures. I live with mine.
Posted by Heidi Hess Saxton at 7:14 AM