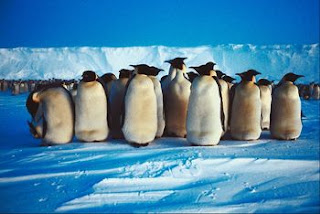 Yesterday when I was talking to Teresa on "Catholic Connection" about Canticle, she observed how easy it sometimes was to get isolated in today's world. There are so many things to avoid, so many bad influences and negative factors that we must be constantly fighting against. It gets so that we just want to quit sometimes ... just turn in our armor and retreat to some little island somewhere with a tidy little cabana and a little square of sandy beach. With the family, of course.

As Teresa was talking, an image from one of my favorite movies immediately came to mind: a documentary that almost immediately caught the imagination of the American public, thanks largely to the inspired casting of the narrator, Morgan Freeman. I refer, of course, to March of the Penguins. Remember those brave Daddy penguins, huddled together against that savage Arctic winter? The only thing that kept them from turning them into POP-sicles was the fact that each of them took a turn at the edges, where the wind blew harshest and coldest, giving those who had taken their turns a chance to thaw their delicates farther in the huddle before venturing back outside.

This lesson is of particular interest to me right now. I recently signed on to help run the summer VBS program at my parish, and have been impressed with the ingenuity and speed with which some individuals ... have avoided making a commitment to help. One woman actually knocked over her husband and vaulted over a baptismal font on her way out of the church to avoid talking to me! (It kind of hurt my feelings ... Especially since it was likely we'd run into each other again!)

The thing is, there are lots of little ways to help, and some of them don't require a lot of time. If people would just say, "Well, I want my kids to enjoy the program ... Let's see if I can find one area to contribute. Maybe I can color in a poster or something." See?

Ha -- this reminds me of a time when my Mom was trying to recruit people to do something at our old church. I can't remember what it was now. Anyway, she was supposed to get up and make an announcement about it, but she hates to do that. So, I offered to do it for her (this has just been in the last few years). I explained what she was looking for (I think it was people to bake for a bake sale that would be at the rummage sale). I said that it wasn't really too much work, so to please consider it. And, then I said, "Really -- it hurts me to see so many people try to avoid my Mom when she needs people to sign up for things. Please...don't scar me by avoiding her." LOL As a matter of fact -- she even had people come up to her to volunteer. ;)