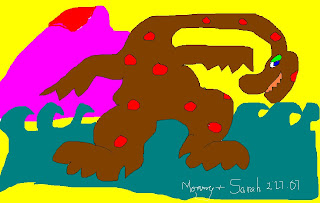 Casually seven-year-old Christopher bit into a french fry and announced that today in school "Jill" told him that not only women can marry men; men can marry men, too. And women can marry women. "It's the law," his classmate, also seven, informed my son.
"It is not!" Christopher argued, confident that she had her facts garbled.
"Is, too!" she countered with irrefutible seven-year-old logic.
I had counted on a few more years before needing to have this particular conversation. But if they're big enough to ask the question, they're big enough to have the facts. "Christopher, there are people who want to change God's law about marriage. God created men and women to fit together in a special way, to love each other and love their children for the rest of their lives. God gives special blessings to people who commit to each other in this way, and society gives special privileges to married couples as well. Some people think they should get these blessings and privileges even if they don't follow God's plan. But God's plan is best, and that is the law we follow."
I had a conversation with Jill's mom later that day ... a delightful Catholic woman whom I've met on several occasions. Apparently Jill overheard a conversation at the last family reunion, and her mother didn't realize the little girl had been processing it all. At least, not until my phone call. "I'm kind of a free thinker," she said to me. "My family is pretty politically diverse... But I guess I need to clarify things a little more for her."
Good idea.
Today on Relevant Radio, Stephanie and Steve Wood talked about the Relativism that has crept in to the minds and hearts of teenagers -- even those serious enough about their faith to attend youth group. If parents are unwilling to instill in their children early on that there ARE absolute truths, that some things are ALWAYS right and wrong, these kids become hardened to any kind of ethical boundaries later on, be they sexual, financial, or political.
Kids today absorb information at a dizzying rate ... It is not enough to control their access to the media, though we should make every effort to set reasonable limits. Beyond that, we need to be teaching our kids the rationale behind the choices we set for them, so they understand not only the "what" but the "why." We need to teach them not only what to think ... more importantly, we need to teach them how.

Great article! I see more and more the necessity of parents using tough love and taking a firm stand about morality. If there were zero tolerance on the part of parents for "living together" than so many young Catholics would not be making that poor life style choice.