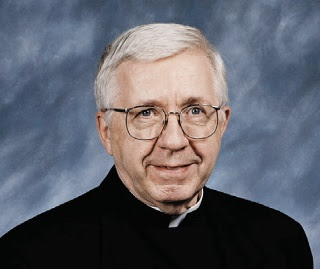 There are some priests for whom the title "Father" seems especially apt. For me, Father Roger was "Father" in every sense of the word.
Shortly after I moved to Ann Arbor and started attending St. Thomas (1994), I made an appointment to chat with him -- I wanted to find out what the needs were in the parish, and offer my services if I could be of use. (What can I say? I was a brand-new Catholic, and didn't know any better.) After listening to me for several minutes, he smiled and murmured, "Wow. What an embarrassment of riches!"
Years later, he told me that from that day on, I was on his "short list" of people he prayed for, every day. Specifically, he prayed for a husband for me. He stepped up his prayers when I started seeing a divorced Baptist man I'd met through an online dating service -- and Father invited "Bob" to chat early on in our friendship, much to Bob's consternation. We parted ways shortly thereafter, though it wasn't until a year later -- shortly after Craig proposed -- that Father confessed to me just how alarmed he had been to see my friendship with Bob develop. "He was a nice guy, but he just wasn't good enough for YOU!"
Craig, he welcomed with open arms -- even though he didn't become Catholic until the spring before we married. It was Father Roger who welcomed Craig into the Church . . . and Father Roger who married us the following July. People still chuckle at their memory of Father's homily, when he told the entire congregation that I thought Craig's big tummy was "cute." (Thanks, Father.) And I'll never forget walking down that aisle, and seeing the shining faces of my future husband and my friend, Father Roger, who appeared to be as delighted as we were to be sharing that moment together. (And who didn't even raise an eyebrow when one of my Protestant relatives stormed the confessional while Craig and I were receiving communion just before the prayer service.)
About a year later, I witnessed an act of profound bravery when Father stood in the pulpit -- as he had stood for each of the five services that weekend -- to tell the congregation that he was checking himself in to "Guest House" for their alcohol treatment program. He did not shy away from our questions or concerns, or allow his condition to deteriorate to the point that he was forced to seek help. Instead he embraced his human frailty with courage and conviction. In what seemed like no time at all, he was back home -- a little slower, and a lot wiser about his own limitations.
A few years later, when we welcomed our children, Father did not protest when I told him we had decided to join the parish closer to the home we had just built, which had an active mother's group and had a high concentration of young families. He urged us to come back as often as we could -- like any loving parent whose child moves far from home. Ironically, our new church home was Father Roger's previous assignment, and when we'd heard that he'd contracted the cancer, and soon after moved to South Carolina, I was grateful to be among a group of people who were praying as hard for his recovery as I was.
Father Roger passed away yesterday. I do not doubt that -- even as I am praying for him now, so he continues to pray for me. I'd like to ask you, please, to join me in remembering my friend, Father Roger Prokop.

Eternal rest grant to him, O Lord.
And may your perpetual light shine upon him.
May his soul, and the soul of all the faithful departed,
by the mercy of God rest in peace.
Mother Mary, take your dear son now to your heart,
and draw him close to the Sacred Heart of your dear Son.
As we remember him in this life,
may he rejoice with you in the next.
In the name of the Father, and the Son, and the Holy Spirit, Amen!
Posted by Heidi Hess Saxton at 7:22 PM

Thanks for sharing this touching and beautiful story with us, Heidi. I am uniting my prayers with yours.