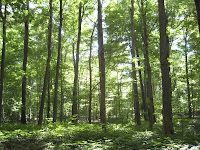 Today was an impromptu Family Fun Day. It was just too glorious to stay inside and clean house. (As though I ever need an excuse to avoid housekeeping.... )
Loading up the dog and "the bag" (juice boxes, granola bars, water bottles, etc), we headed for Maybury State Park. I was in favor of the little circular trail with the children's play area at the midway point ... but Craig was in "hike mode" and promptly lit out for the next county, the kids and I trailing behind with fluxuating enthusiasm.
"This is BOOOOOOOOOOOOOOOOORING. Hey! Look at that snake!" (General shrieking and carrying on ensues.)
"I'm HOOOOOOOOOOOOOONGRY. Gimme the water bottle." (General bickering and mutual poking with sticks commences.)
"I'm TIIIIIIIIIIIIIIIIIIIIIIIIIIIIIIIIIIIIII-ERD. CAAAAAAAAAAAAAAAAAAAAAAAA-REE MEEEEEEEEEEEEEEEEE!" (At this point Craig backtracked with the dog to check on our progress, and Maddie decided to get up close and personal with a disenchanted boxer, wrapping Craig's lower extremities in leash until he resembled a turkey roast.)
Three hours later, we returned to the car hot, tired, and ravenous. Craig considered it an unqualified victory to have worn out both kids and the dog. As well he might, as for most of the adventure he had led the way several hundred yards ahead while I brought up the rear (in Sarah's case, quite literally) toting both kids and the "fun bag."
As we trundled the kids into the van, Craig turns to me. "Aren't you glad we took the other way? It was such a beautiful day ... and Chris got so much exercise, you can hardly tell he didn't take his meds!"
If you're wondering how I responded to this, read the header over again ... and take a guess.
Happy Mercy Sunday!
Posted by Heidi Hess Saxton at 5:01 PM

LOL, sounds a lot like my day. Glad you made it through ok.

Hi there!
I found your blog looking for fellow foster parent bloggers. I can relate to the "grab the moment" days. I wrote about it myself back in the middle of April. I think it is a survival strategy [and challenge!] to pause and take the time to experience joys, don't you?
I hope you will take a minute sometime to check out my blog and maybe even share it with other foster parent friends. It is at
upbeatsanddownbeats.blogspot.com
Thanks for the blog. I look forward to reading yours often.
Gail