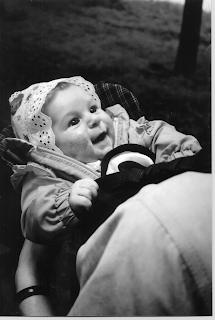 This week's Catholic Carnival is up and running at Adam's Ale. Check it out!

(The little cutie here is my friend Denise's little girl, whom she was bringing home from Ukraine when this picture was taken. Adoption reflects in a special way God's love for us.)

On Catholic Exchange today I found a link to this article, in which artist Emma Beck committed suicide after aborting eight-week-old twins, at the insistence of her boyfriend. She left a note, saying in part, "My babies need me now ... I want to be with my babies."

It is a triple tragedy, of course ... a woman feeling so wracked with guilt that she would kill herself after aborting her children. I've had two women, on separate occasions, tell me their own abortion story; one of them is related to me.

As I listened to these two women pour out their profound regret, I struggled to not to let judgment or horror show on my face, or escape my mouth unchecked. It was all too clear that both women had been scarred for life because of their choices. In one case, the woman had had four abortions (such stories are not uncommon), and to this day struggles alone to reconcile her faith -- what she knows to be true about God -- with her lasting sense of shame and guilt that from which she could not get relief, no matter how often she went to reconciliation or "Rachel's Vineyard" retreats. She simply could not forgive herself.

On one occasion, after listening to the "confession" of another dear sister, I spent weeks afterwards chastising myself for not being there to help her, for not being the sort of person she felt she could turn to for help. What if I had offered to open my home to her, help her get herself back on her feet? Instead I had to sit there and listen as one of the women I love most in this world told me the dark secret she carried inside her for almost twenty years.

How many of us have made choices that we would give ANYTHING to be able to make over again? I imagine most of us have these kinds of regrets. In the Lenten issue of Canticle, I tell one such story about my own life ... how I lived through a time of profound regret, and how I found peace through God's mercy in the sacrament of reconciliation.

It was not easy to write this story, but it was a story that needed telling simply because of the women I've encountered in my life who feel as though they are beyond God's mercy, beyond the reach of grace. 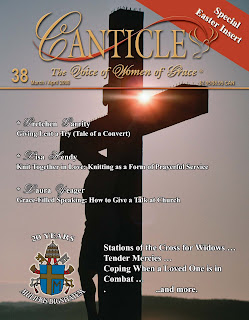 In reality, the ocean of Mercy that exists in the heart of God is deeper, and broader, and wider than the most hellish pit of despair.

In my article, entitled "Tender Mercies," I go on to recount the true story of Rudolph Hoess, commandant of Auschwitz, who purportedly confessed and was reconciled with the Church shortly before his execution, making prophetic the words of Maximillian Kolbe, who just before his own death at Auschwitz admonished his fellow prisoners: “Let us pray for the Nazis, because no conversion is impossible!”

By the Mercy of God, there is grace for Rudolph, and for Emma. For each of my struggling sisters. Even for me. Even for you.

And so, I ask you to join me in praying for the repose of the soul of Emma Beck, that God would shower her with His great Mercy. And pray for the doctor who performed this "procedure," that this great tragedy would bring about a change of heart ... and change of vocation.

Be sure to wander over to my blog today, Heidi. Many thanks for the encouragement you offer moms every day through your books, blogs, emails, etc. God bless!

What is such a tragic story.

I can't imagine how difficult it must have been to list to your sisters confession.

I will keep Emma Becks family in my thoughts...