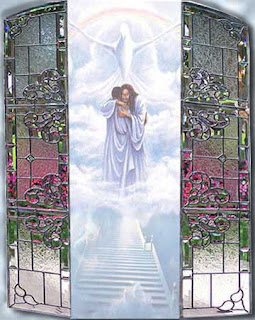 This was a difficult Thanksgiving for my family. We had funeral services for my paternal grandmother on Tuesday, interred her on Wednesday … then sat down Thursday to remember her favorite holiday, Thanksgiving.
I held down the fort at my aunt’s house while the others traveled five hours away for the burial. Small children ran amok while I made deep-dish pumpkin pies that, a day later, collapsed in a depressing pile of goo instead of gleaming slices of custardy goodness. Clearly, I had been off my game that day in the kitchen.

For me at least, the difficulty was not the funeral itself – Grandma was 92, had not been in her right mind for some time, and we were not especially close. I write about my last encounter with her here. And yet, she had mothered three of my favorite people: my father, my godmother Aunt Susan, and my Uncle Pete.
As I looked over the sea of faces at the funeral, the raw grief of these three beloved people, sitting side by side in the front pew, struck me hard. They had lost their mother; nothing – not even their conviction that she was at that moment cooking Thanksgiving for her husband in heaven – could mitigate their anguish.

Then it hit me: In all probability, the next funeral I attend would likely be one of theirs. Only then did the sadness overwhelm me … not the finality of hers, but the certainty of theirs.

In the Gospel this weekend, Jesus warns his disciples of the uncertainties and vicissitudes of life – and of the inherent dangers of getting caught up in what, in the final analysis, simply doesn’t matter. Even those of us whose days of “carousing and drunkenness” are a hazy, distant memory are sometimes lulled by the incessant grind of “daily life.”

* Late nights at work that leave empty places at the dinner table.

* Hours of television that fail to reduce the pile of “unreads” on my bookshelf.

* The early morning rush, hustling children and husband out the door with lukewarm efficiency.

* Sunday morning “devotion,” one ear on the priest and the other trained on the movements of my restless children.

With the approach of the holidays, the temptations arise anew. Which will find its mark first, the intoxicating highs of the partying and gift-giving? The anxiety-producing lows of unpaid bills and family dramas? How would it change things if we knew that this was to be the last Christmas together?

“Memento mori” (remember your death) was a recurring theme among the early Christians. Even in times of great joy and celebration, the knowledge of their immanent mortality lent a balance and intentionality to their living that we do well to emulate not because of the dread of death, but because we are certain of a greater celebration to come.

In these weeks ahead, as we anticipate the Light of the World to come, may this sentiment of the early Christians direct our steps and restore our sense of balance as we wait for the encroaching darkness.

Eternal rest grant unto us, O Lord,
and may perpetual Light shine upon us;
may the souls of the faithful departed, and all of us,
through the mercy of God, rest in peace. Amen.

This is a poignant reminder at this time of year. Beautifully written!