“Imitation is the most sincere form of flattery.” I’m not sure who said it first, but every mother knows the truth of it.

It’s Sarah refusing to leave for church until she has put on her “lipstick” (flavored chapstick), and holding her baby over her knees and patting its back, just as I used to soothe her when she couldn’t sleep. It’s Christopher placing his shoes carefully next to his father’s, one on its side and the other propped up by the toe … in the middle of the entryway, exactly where Craig kicked his off as he walked in the door. 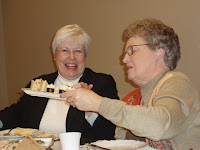 ars, my tributes have taken a different form: hearing Mom’s voice channel out of my own mouth with exactly the same intonation and heat my sisters and I swore we’d never use on our own kids. (To my knowledge, none of us have pulled it off completely.) However, I also do my best to emulate some of her great qualities: Her generosity to those in difficult situations, her well-toned faith muscles (some days they are the ONLY muscles that get a workout), and her creativity in the kitchen as well as in the home. She makes quilts and handmade dolls; I write. (That's my mother on the right.) 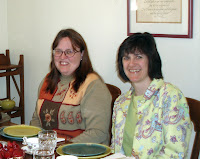 nderson (below, right), who are in the process of adopting a third child from Guatemala. It was a true “labor of love” for Lilian, who is a fabulous cook (the kids particularly enjoyed dunking strawberries in the chocolate fountain), and we all had a great time. It turns out that their adoption adventures started long before she knew Jim, when she sponsored a little Guatemalan boy (now 18) so he could go to school and learn a trade. Last year the boy and his family traveled for two days just to be able to spend a few hours with the woman who had been so kind to him over the years.

In a true sense, Lilian had mothered this child spiritually, making it possible for the young man to reach his full potential, despite the hardships he had to endure along the way. When it came time to bring a child home, it was only natural that Lilian’s heart turned first to the country where she already had an attachment. That love keeps them going back again and again, despite the expense and other hardships overseas adoptions entail. She does it because she is a mother, and like all mothers she is willing to go to the ends of the earth, if necessary, for her children.

The Catechism affirms that “Spouses to whom God has not granted children can nevertheless have a conjugal life full of meaning, in both human and Christian terms. Their marriage can radiate a fruitfulness of charity, of hospitality, and of sacrifice” (CCC 1654).

Watching Lilian’s family and friends come together in support of them, I realized I was witnessing a beautiful expression of this truth. By their hearts of love, generous hands, and willingness to sacrifice both financially and emotionally in order to enlarge their family through adoption, Jim and Lilian had gifted us with an opportunity to imitate their example – not as children, but as family nonetheless. The family of God.


Heidi Hess Saxton is the editor of “Canticle” magazine and the mother of two young children regularly featured in the CatholicMom.com adoption column. In honor of Mother’s Day, Heidi extends a special offer to CatholicMom.com readers: Subscribe to “Canticle” by June 10, and get $1 off your subscription! Mention code SC07 when you place your order by calling 800-558-5452 or going online at www.canticlemagazine.com.
Posted by Heidi Hess Saxton at 7:28 AM