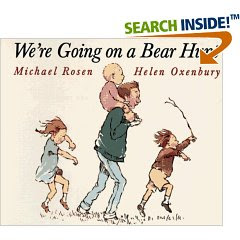 Christopher is reading this classic in his first-grade reader. I don't know if it's a classic in the technical sense (generally defined as a book most intelligent people own but have never actually read unless forced to by a third party such as a teacher or other guy you are doing your best to impress) ... but it brings up pleasant memories.

My mother, you see, was the original Campfire Girl. She knew a million little ditties, complete with actions and sound effects, to keep children entertained for hours on end. (Since we had no television, it didn't take much to keep us entertained back then. Now Mom would be lucky to keep her audience from bouncing off the walls for a full fifteen minutes.)

Of course, when Christopher asked me to read the story to him first, I pulled out all the stops: Growling, squishing, rustling, and tiptoeing as the story required, as he looked on first in protest (his TEACHER didn't do it like that) ... then with wonderment ... then with unbridled glee.

Goin' on a bear hunt
Gonna catch a big one.
It's a beauu-u-u-u-tiful day!
I'm not scared!

You want to know something interesting? The louder and more animated I became, the quieter and more subdued they became. (Sarah actually rolled herself in her lovey on the floor and went to sleep.) This contrasts strangely with the three days previously when, at that precise hour I was rolled into the fetal position on the couch, coping with stomach flu and a migraine (yes, simultaneously). I actually thought they were going to kill each other ... and I didn't particularly care so long as they were quiet about it.

But today, they sat still and watched the spectacle unfold in front of them. And not once did they ask to turn on Little House on the Prairie.