In Defense of the Tooth Fairy 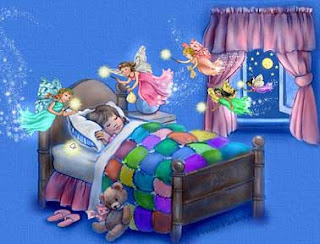 Monday on the way to religious education, I listened as Christopher informed his sister that there is POSITIVELY no Tooth Fairy. Sarah, having a steadily growing stash of cash and no shortage of baby teeth, was none too pleased about this pronouncement.

"There is TOO a Tooth Fairy. Right, Mom?"

*sigh* For a moment, I envied those parents who from Day One refuse to fan the flames of fiction in the hearts of their children. No Easter Bunny. No Santa. And no Tooth Fairy.

Sadly, I've never lost an opportunity to fan those particular flames. I was also mildly annoyed with Christopher for bursting his little sister's bubble like that. So I messed with him a little.

"So ... Christopher. How did you come to decide this? Was it something one of your classmates said?"

"Uh-huh. Josh said he peeked last night, and saw his Dad put the money under his pillow. He says it's always Moms and Dads. No fairies."

"Well, let's think about that for a moment. Doesn't Josh have an older brother, who might have told him about the Tooth Fairy?"

"So is it possible that the Tooth Fairy stopped coming to the Trout house because the Big Brother didn't believe in her any more, and the parents didn't want to spoil it for Josh?"

In the rearview mirror, Christopher's eyes furrowed as he thought about this one. "Well... but the last time I was at the dentist, I lost a tooth and the Tooth Fairy didn't come and give me money for that one."

Now his eyebrows were so furrowed they nearly touched. "Well..."

"Listen, Christopher. You don't have to believe in the story of the Tooth Fairy if you don't want to. You're a big kid now, and maybe you're too big for the idea of the Tooth Fairy. But you should know that if you spoil it for your little sister, the Tooth Fairy might just get so mad that she doesn't come around any more. And you wouldn' want THAT to happen, would you?"

That did it. Impromptu, in unison: "I BELIEVE IN THE TOOTH FAIRY!!!!"

GREAT story! (i followed your link from Mary's site.)

Personally, I am waiting for the day when some non-believer children begin storming the admin offices of schools, demanding that the Tooth Fairy and all references to her be thrown out of public schools. Additionally, they will want the "Mom and Dad" theory taught as fact, and they will expect that any child who believes in the Tooth Fairy will either get with the program or LEAVE. LOL!

I think a certain amount of atheism begins in childhood, with a renunciation of the Tooth Fairy and all her followers.

The problem with such things is that it becomes not so much a rejection of a belief, (which is perfectly okay) but it transforms into a rejection of fellow human beings. Sad, isn't it?

In my family, with the big age spread we have, my big kids are very protective of the fantasy beliefs like Santa, Tooth Fairy, Easter Bunny because they remember the fun it brought them. They want their little brother to continue to have that fun too.

I don't think they're harmful; it's just something fun.