Sometimes You Drop the Ball ... 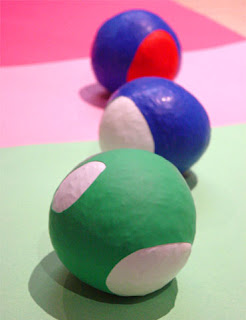 Every once in a while my day will spill over into the wee hours of the next morning. I don't know whether it's hormonal, or stress, or simple overload. But sleep simply will not come, and I can either stare at the ceiling or get up and be productive.

Yesterday was a hard day. I had coffee with a recently widowed friend, whose husband was an active member of the Knights of Columbus and a faithful partner with me on our Vacation Bible School programs. Frankly, I'm a little relieved we'd already planned to take a break from VBS this year because of the construction -- I don't know how I'd get through it, feeling that empty hole on the other side of the stage.

She told me that the day after her husband died, one person (who shall remain nameless, but should have known better) called about the money Bob had collected the day before he died, parking cars for the U of M game. This poor woman couldn't even put her hands on her husband's insurance policy, but this jackass (there is no other name for it) was determined to collect, right then and there.

I'm happy to report she hung up on him.

A few hours later, I sat in on a school leadership meeting, where we talked about how to spend the money raised by Boosters. I had wanted to start a ccmpetition between the classrooms, to see which class could add the most to the Boosters coffers. A pizza party would be the prize.

The plan went down in flames. My eye was on the Boosters goal: $50,000. But others were more concerned about hurting the feelings of families that couldn't contribute as much as we wanted them to. They wanted the focus to be the number of families that participated not how much each family gave. I didn't shift gears quickly enough, and my well-intentioned plan was shot down. Ouch.
So here I am, late at night, contemplating these two events and wondering if they are somehow connected. Is this a case of putting programs before people, and money ahead of relationships? Could be. Something to consider: In juggling all the balls, is it better to drop a few . . . or to throw them at the feckless few who don't "get with the program"?
The Type-A in me would prefer the latter. But I'm guessing that is not WJWD.
Posted by Heidi Hess Saxton at 2:04 AM