My Thorn in the Flesh ... Right Between the Eyes 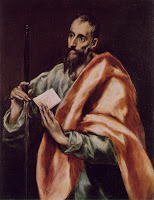 Today's second reading is one of my favorite epistle passages ... It presents a human side of St. Paul to which I can readily relate -- can't you? (From 2 Corinthians 12:7-10.)

"... because of the abundance of the revelations,a thorn in the flesh was given to me, an angel of Satan, to beat me, to keep me from being too elated. Three times I begged the Lord about this, that it might leave me, but he said to me, "My grace is sufficient for you, for power is made perfect in weakness."

No one knows exactly what the "thorn" was. Some suggest it had something to do with his eyesight (others say it was his wife, which could explain a lot of other things ...). As you read the Scriptural account of the life of St. Paul, you can't help but wonder if it had to do with former associates in the Sanhedrin who thought their favorite Pharisee had gone off the deep end. Nothing quite so humiliating as the open derision of people whose good opinion you once valued, or in whose "inner circle" you once belonged. (Not that I'm projecting here...)
To me, the phrase "angel of Satan" also conjures up images of depression . . . something to which many extraordinary moms (and "creative types") can relate. Or possibly another condition with which I have an intimate acquaintence. If you've ever been there, you know what I mean.
One morning you get up and coast in automatic pilot on four whole hours of sleep, Diet Coke in hand, kids dressed. In nearly color-coordinated outfits. (All articles in each ensemble coordinating with each other, not those of the sibling. That would be asking WAY too much.) And an hour later, dishes and a load of clothes in their respective washers, and dinner is in the crock.
Just as you head out the door for an hour or two at the park, a familiar flash of light strikes you right between the eyebrows. Then another, in one temple. Dang, another migraine.
In a way, those searing little thorns keep me grounded. They remind me when I'm taking on too much -- not sleeping enough, eating or exercising properly, or generally getting in over my head. With one of these, I have to depend on others to get me through -- my husband, my kids, occasionally even a friend who will take the kids for an hour so "Mommy Monster" doesn't come for a visit.
I used to think that "Real Christians" didn't let those kinds of things slow them down or ground them ... That putting others needs first, always, was the "right" thing to do. As a more grounded forty-something woman of faith, I now see the painful truth: In the long run, I'm not Superwoman, but someone who wrestles with her thorns and weaknesses. Whatever gifts that God has given me to share with others -- He put them in a somewhat fragile gift box.
And, like St. Paul, I trust He did it with my ultimate good in mind.
How about you? What's your thorn?
Posted by Heidi Hess Saxton at 1:42 PM

Paul’s Thorn and Mine

For each person the thorn is different. Having a son with Downs Syndrome, I tend to go about the daily business of taking care of my children as if there is nothing to consider. He still needs his diapers changed. He still needs bottles and solid foods and baths and belly kisses. He coos and rolls over and needs time on the floor to work on creeping about the room. He sounds and looks no different for the most part than any child I’ve had before. And so in the midst of laundry and dishes and bath time routines, I forget his extra chromosome. I forget his Downs Syndrome. He’s just Paul.

Then I am out, perhaps at mass, perhaps at a mall, and I see one. I see a child who is the same age, and twice as big, doing exponentially more things than the little miracles I see every day done by my son that I take for proof that the Downs Syndrome won’t be a big deal. The thorn pierces my heart. This is real. This will ache. He will have limitations the world can see and impose and they won’t be entirely wrong to do so, and my eyes well up and my heart howls.

It doesn’t happen very often, and I try not to dwell on it. There is no profit to such wails to my motherly mind, they don’t help Paul and they paralyze me. But the thorn remains.

Poor choices I made years ago keep me from getting full of myself. Through prayerful reflection on my own (past) decisions I come to accept my imperfections and love myself anyway, as Jesus does. Sometimes I do and sometimes I struggle mightily with it, but either way, I know it's what I need.

I love this post. Just found your blog and I'll definitely be back.