Note for pet owners: Did you know that Heartguard now comes in a six-month shot -- so you don't have to remember to give your pooch his monthly pill? Ask your vet about it! Alternatively (or in addition), try one of these Tick Keys! 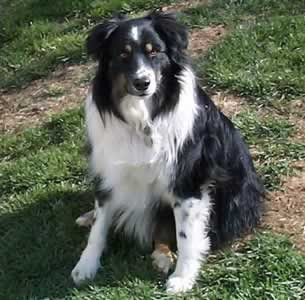 Two days ago, I found a tick in Maddy's fur -- fully engorged body, head was firmly attached to the skin under her arm. Carefully I tweezered the little pest, but then Maddy flinched and blood spurted everywhere. I couldn't get to the head, but could still feel something just under her skin.
Today we went to the vet. Maddy was NOT happy, though she obligingly gave each of the technicians a full tongue bath after we lifted her to the table. They took a blood draw -- which took two tries and much pitiful yiping -- to be sure there was no lyme disease or heartworm. Then they gave her two other shots, which made her cry some more. I stroked the hair on her back and murmured gently, trying to calm her down.

I had mentioned her tendency to "teeth" (usually gently) on my arm, and the nurses said he would give me some pointers. Soon the vet made his entrance, and began to examine Maddy. At one point he flicked off the rest of the tick, which had attached itself to the blood clot. This was the final straw for Maddy, who began thrashing around and yiping. Instinctively, I threw myself over her and tried to calm her in my most soothing voice. At which the vet backed up a few steps, fixed his eyes on mine, and said to me, "You know, YOU'RE the problem."
Me? What problem?
"You said she's biting, right? Only you, and not your husband? Even though you say "No," and yipe like a puppy, and put her in her crate if she doesn't stop? Of course . . . She sees herself as a person, and you as her sister. Not an authority figure. Because of this hugging business -- you're rewarding her for bad behavior."
I couldn't believe my ears. Two other nurses had been holding her -- including one of them that had actually picked her up and held her like a baby while the other one clipped her toenails. Was he serious?
I felt myself getting more and more upset, and I searched for the words to adequately communicate my displeasure. To my horror, I felt tears stinging my eyes. Oh, great. THAT'S great, Heidi. You big baby. I sat down and pretended to search through my purse.
Hurridly the vet left the room, followed by his two (female) technicians, who quickly reappeared with deep apologies. "He shouldn't have lectured you like that. I told him that I'd wanted to kick him when he went on and on like that . . . He feels terrible, and sent us to tell you how sorry he was . . . "
In truth, I'm sure that he had a point: When dogs forget they're dogs -- and think they're people -- chaos inevitably ensues. With two small kids at home, we can't just let this go. And so, our "puppy" has been banished from the family couch, and is spending longer periods of time in her crate. It's not as much fun, of course -- but then, it's better than another lecture from the vet!
Posted by Heidi Hess Saxton at 7:11 PM

Oh I just have to tell you, I thought when you said Maddy you were talking about your daughter. I was wondering why you would take your daughter to the vet. I really should pay much more attention to your children's names. I forget a lot of names. :::blush:::