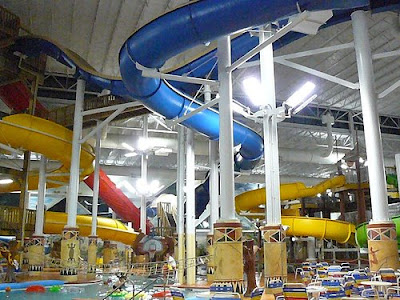 Sarah and I decided to meet at Kalahari Water Park (which tonight I discovered is the nation's largest indoor water park) for a little R&R with the kids. We hadn't seen each other since our grand adventure to the Catholic New Media Convention last summer, and were due for a visit.
Both of us got more than we bargained for. Poor little Nooner shrieked each time the Big Bucket drenched the main floor with the metric equivalent of a dumptruck of water, blowing a wet breeze her way. Four-year-old Babs was equally distressed with the prospect of following my daughter and me down the BIG SLIDE. Poor little kiddo.
Just as things calmed down a bit, we decided to move to the other side of the water park. Chris (9) said he wanted to hop across the hippos one more time, then meet me at the wave pool. "Okay, I'll see you there in ten minutes," I told him. That would give us time to settle in at the kiddy pool area.
Problem was, some kid took a dump in the kiddy pool, forcing the evacuation of that area. Our kids were too small to get into the wave pool area without life vests, which took more time. By the time we were all set to go ... close to thirty minutes had passed. I looked out over the water. No Christopher.
I asked Sarah to hold down the fort and went to the hippo area. No Christopher. "Have you seen a little boy with red, white, and blue swim trunks?" I asked the attendant, who looked at me as though I'd sprouted another head. "No, sorry Ma'am."
Trying not to panic, or give in to the horrific scenarios playing out in my head at that moment, I cornered Towel Guy ... who as it turned out was a VERY SMART Towel Guy. "Don't worry, we'll alert security, Ma'am," his voice was soothing, reassuring ... which made me panic just a titch.
We looked back at the Big Bucket. No Christopher.
We looked at the snack area. No Christopher.
Finally, I asked if he would go into the men's locker room ... Oh, dear God please help me find him alive and well! By this time a full hour had passed.
Just as the security guard was about to put the place in a full lock-down, Towel Guy emerged from the locker room with his arm around a visibly shaken Christopher.
I burst into tears. So did he (my son, not the Towel Guy, who was the picture of concern). Then I hugged the stuffing out of Chris, and threatened to make him hold my hand for the rest of the day. (Surprisingly, he seemed amenable to this.) We then walked around the park, and made a plan for exactly what he would do if ever ... EVER we got separated again. Which wasn't bloody likely, given the fact that I wasn't about to let him out of my sight.
When we got back to the girls, Sarah was pacing up and down the shallow end, clearly doing battle with the angels. "At first I prayed that you would find him ... Then when time went by and you still weren't back, I prayed you didn't kill him when you DID find him. Do you suppose that's what Mary did when they lost Jesus in the Temple?"
Yes, I'll just bet she did.
Thank you, Lord, for protecting us
from our own misguided sense of adventure,
and lapses in parental judgment.
Thank you, Lord, for helping this terrified Mama.
And please be with all those terrified mothers
who are still searching for their little lost lambs. Amen!
Posted by Heidi Hess Saxton at 8:12 PM

So glad he's okay, and also that you didn't kill him. (My mother in law used to say, "I'm gonna kill you and tell God you died!")

Our family always tries to remember to have a meet-up place in case we get separated, plus who the kids can ask for help. Sometimes we forget, especially as the girls get bigger (ten and seven now). This is a good reminder to us all to have those plans in place.

it's my worst nightmare come to life.

so glad you found him!!

Ahh, you're such a good storyteller, my friend. I'm going to have to write about it from MY POV next, huh? :)

There is NOTHING like that feeling of relief when you finally track down the wayward child. I'm so glad everyone was safe!

PTL!!! This happened to us in Disney World. I made a complete fool of myself running around the park screaming her name. My dh just stood there, and was calm, but all of a sudden I started running, making lefts, then rights, and I went right to her. I was apparently shouting the Our Father and Hail Mary's... LOL... but it worked and they took me right to her.
I feel to the ground and hugged her... she cried, I cried, people clapped. She was 5 at the time, and is now 22.
How do we survive all this?