Adoption vs. Abortion... Letter from a Birthmother 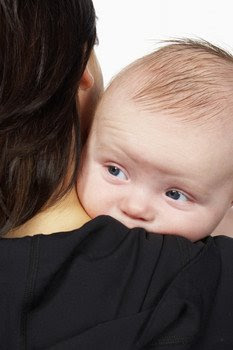 Tonight I received this note from "Lynn." She raises an important issue that I've encountered many times since I started writing about adoption. So many of these women are grieving -- deeply -- the loss of their children. Some feel as though they were coerced. Others simply wish they'd had the opportunity to parent.
The grief they feel is real. Patricia Dischler, in her book "Because I Loved You" explains that, for first/birth moms, making an adoption plan is one of the most painful experiences of her life. Even when that choice is the right one, for the sake of the child. And sadly, it seems that many of these women -- in their grief -- honestly believe that for those who cannot parent, abortion is a better choice. At the very least, they argue, the options are not abortion vs. adoption, but abortion vs. parenting. This woman is one such example.
I am a birthmom and I have met many others. Not one among us considered abortion and then chose adoption as an alternative. I understand that your motives for this argument are made for the sake of children but since abortion and adoption are mutually exclusive decisions, your argument does not have a very firm foundation. I'd be happy to hear more of your thoughts on the matter and hope you don't mind that I've shared mine. Thanks, Lynn.
Dear Lynn: Of course I don't mind hearing from you -- especially since you pose your ideas so respectfully.

In years past, the default decision for women in crisis pregnancies was adoption. Since the legalization of abortion, this trend has changed -- and millions of women and children have been hurt or killed in the process.

Abortion and adoption are "mutually exclusive" only because it is impossible to adopt a dead infant. If a woman who felt she was unable to parent (for example, the main character in the movie "Juno"), was encouraged to consider adoption instead, she would both save the child's life and prevent herself from suffering the long-term effects of post-abortion trauma. Making an adoption plan is not without its challenges -- but for women who feel they are unable to parent, it acknowledges the intrinsic value and dignity of the child without forcing a woman to bear the lifelong burden of knowing she had killed her child.

A lot of this is about education, about teaching our children that a life in the womb is indeed a human life, with the right to "life, liberty, and the pursuit of happiness," rather than a "blob of tissue." So many women have bought into the lie that the life inside them isn't really a child -- and the horrific reality hit them too late to save the child. (This is one of the most important differences between adoption and abortion: With abortion, the woman shies from making an adoption plan because she is afraid of the pain of losing her child; with abortion, the pain hits much later -- after it is too late to save the child.)

In this day and age, medical technology is capable of saving children -- performing surgeries and taking other lifesaving measures -- long before they are born. On the other hand, these children are killed -- legally -- while the only part of them that has yet to be delivered is part of their scalp. It's all very arbitrary -- and evil. When there are viable alternatives -- when there are so many families who are willing and able to care for these children, why on earth should these children not be given a chance to live?

I would just hope to see the Mothers also given a chance to reconsider parenting, even if they chose to not abort with the intent of adoption. I don't want them just led to adoption blindly, you know? They both will bond (infant and mother) and the Mother may rethink what it actually means to give life and become a parent.

The time leading up to the birth and immediately following is a particularly vulnerable time for women. Her natural instinct is to parent, regardless of her actual ability to do so. Unfortunately, even social workers are often loathe to raise the practicalities of the situation, despite the fact that their silence (or, worse, their well-meaning pressure to get the girl to parent) often consigns the child to a life of neglect and even abuse.

If the woman can demonstrate the means and the support to make a life-long commitment to the child, and she is willing to place his needs above her own (especially where marriage is concerned), single parenthood can be an option. However, I've seen MANY cases where the woman makes the decision to parent for sentimental reasons (often pressured by her parents, who can't bear the thought of losing a grandchild), and the mother and child both live to regret it.

Five hundred thousand children in the United States are in the system because their parents were unable or unwilling to care for them. Others -- who knows how many? I know two such cases intimately -- endure abuse at the hands of their mother's husband. An AMAZING number wind up perpetuating the same mistake, and become teenage mothers themselves.

If the mother "reconsiders" parenting, without taking a cold, hard look at what this means (in terms of what the child needs), it is the child and not the mother who suffers most.

I understand that there are many birthmothers who regret their decision to relinquish. You may be one of them, I don't know. I'm sure you made the best choice you knew at the time.

Here's the thing: Like anything else in life, there are so many variables to the choices we make that it is really impossible go back and retrace our steps with any degree of certainty. The only thing we can do is move forward. If we are fortunate, we may be able to help someone else.

I do hope that you are able to establish contact with your child again, and assure yourself that he is thriving with his family. Patricia Dischler's book "Because I Loved You" (which deals with open adoption) really helped me to understand how this can play out in the best interest of all concerned. If you haven't already read it, I urge you to do so.

Thanks again for writing.

I agree that she should parent if capable and would also hope the couple consider marriage if possible.
I am not convinced however that neglectful and abusive parents were once considering abortion or adoption for the child/children, as a general rule.
I am not a birthmom, but an adoptee and adoptive mom! My Adoptive mom was a fosterchild never adopted by her fosterparents.

Oh! I thought you were the same person who originally wrote to me, who identified herself as a birthmom.

I think it's very sad when foster children aren't adopted by their foster parents. Many states are changing their policies so the subsidies continue after adoption, which is one reason many foster parents do not finalize the adoption (they feel they can't afford to).

Children deserve a loving, permanent home. All children. That's why I do what I do ... why I try so hard to encourage families to open their hearts and homes to these amazing kids!

new here.- v. interesting. I lost my daughter to adoption in 1970. times were much different then. I have many friends with adopted children - they are fantastic parents. their kids are great and happy, and doing well. My daughter had good parents, and is happily married, and she's an excellent mother. I am friendly with her mom- I met my daughter- she found me 3+ yrs ago. It has changed my life and it has changed hers. all for the better. The mom has been willing to be open to me, she also has a bio son, maybe that has helped. I think she likes me and wishes i'd fade away. If I'd had an early abortion in 1970- it would have been very beneficial to me. I've suffered alot and really the loss of my daughter, the secrecy and SHAME and silence surrounding my pregnancy- the grief over her, has diminished me in many ways. So my thought here is really, for you adoptive parents, you do realize that it's against human nautre to give away your baby. It's against the natural order of things. It may be 'best' but truly no baby wants to be adopted. It wants to be with its mother where it has always been. So in the ensuing years, I do hope that adoptive parents realize how much their child loves them, but how much also their child longs to know his/her original mother. And how much the mother- if she can climb through the mental anguish she's lived with, needs to know her child. I almost couldn't handle the grief that I felt when being reunited. It's taken alot of work to face my loss and also to embrace my gorgeous girl as my child, whom I love with my entire heart. She needed and wanted that. I sought counselling and found an internet group of other women who lost their children, I've read and learned so much. Now I can be a bit open to my friends who are adoptive parents. They are shocked that i am a 'birthmother'. But it's an opportunity to learn for them and I think it's been helpful. They all say their child doesn't want to know. I doubt it. But by talking we are learning, and I do think when the time comes they'll be better prepared to understand that their child does need to 'know'. and probably 'love' their original mother. My daughter always wanted to know me. She said when her mom told her she was adopted her world shifted. She loves her parents and brother, but says she's not like them. It took alot of work for her to find me- how I wish I'd known how much she needed to know who she was. I was too buried in my own giref to understand hers. I do hope my thoughts are helpful. And I honor all you parents who are raising and loving your adopted children.

I was adopted before 1950. I was adopted to parents that were very abusive. It was never picked up on by anyone who came to visit from the adoption agency. I was a captive and could do nothing but marry and leave as soon as I could. I think being aborted would have been better than the life I had to lead while single. My life was better as soon as I married, but I will have emotional scars all my life. There isn't a day that goes by that I don't remember and relive the abuse. Not always is adoption better.